Our weekly podcast represents the ultimate destination for getting the latest news about and hearing directly from some of the most recognizable DMV (DC, Maryland and Virginia) sports figures. To put it simply, this will be the place to hear the hot topic or buzz of the sports world. Each show will have a signature guest that will reinforce the show’s theme. 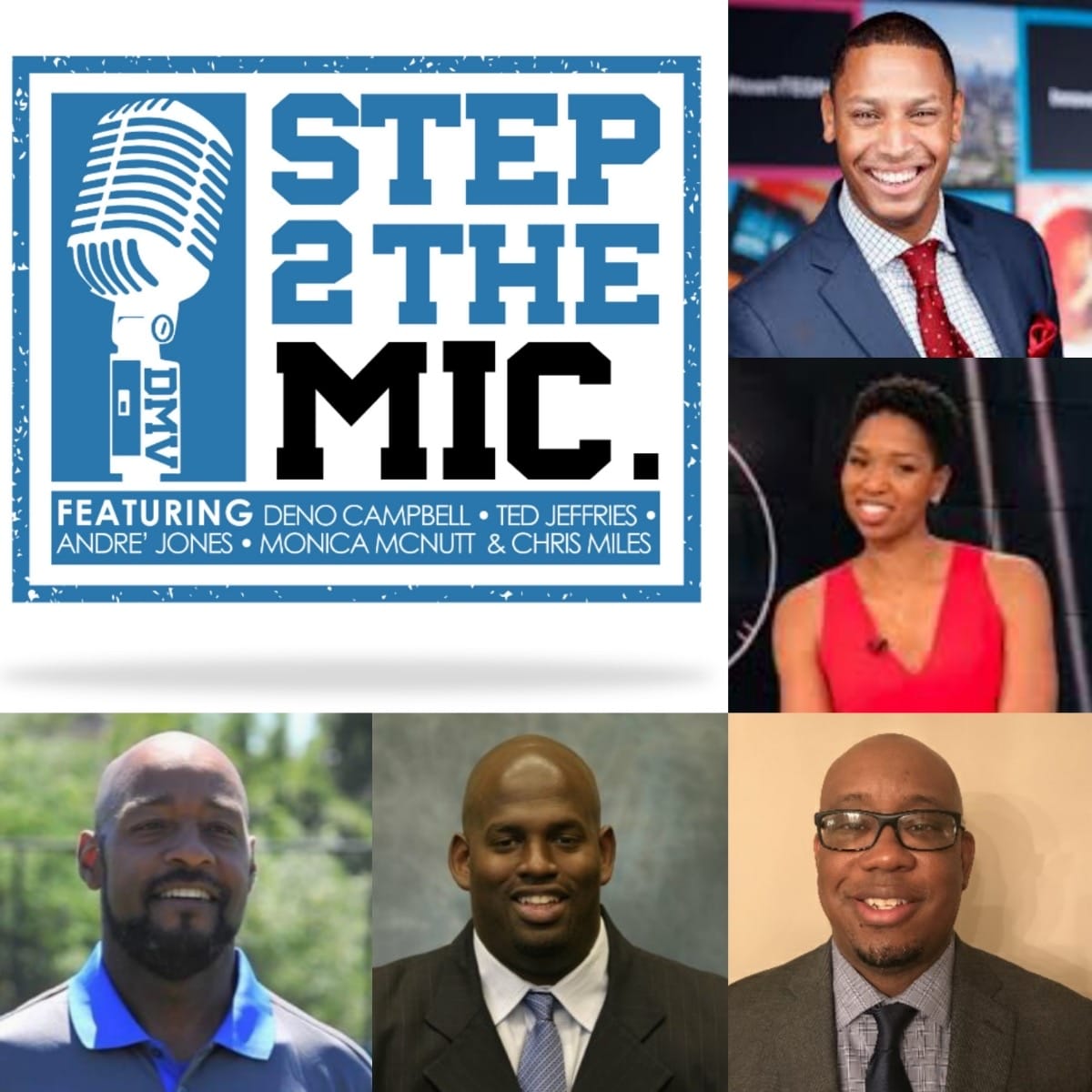 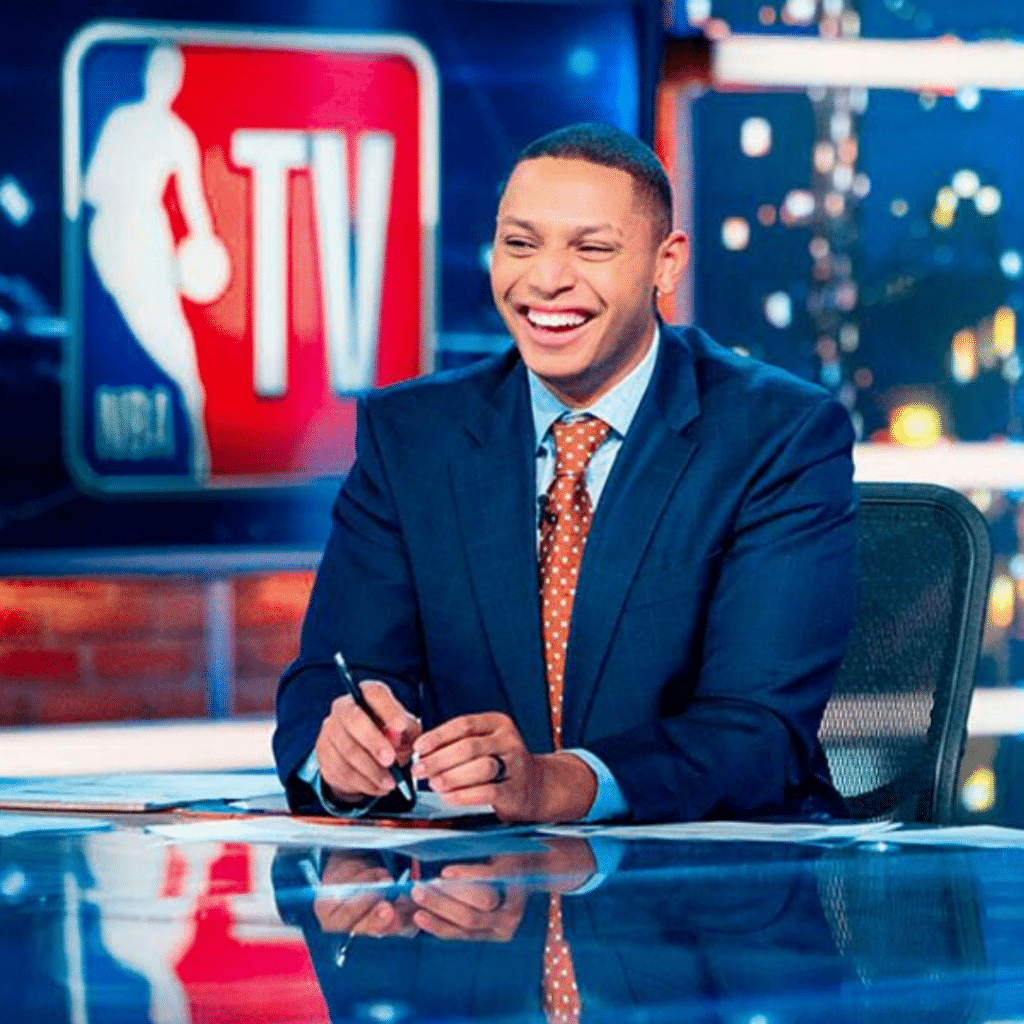 Chris Miles has over a decade of experience as a sports anchor, reporter and host, Chris has covered almost every major sporting event, including the Final Four, College Football National Championship, and multiple Super Bowls. Chris has worked in seven different markets and has covered the full gamut of sports from Nascar to the PGA and (his personal favorite) the NBA. Currently he works in both Washington D.C. and Atlanta, pulling triple duty for NBA TV, NBC Sports Washington and 106.7 The Fan. 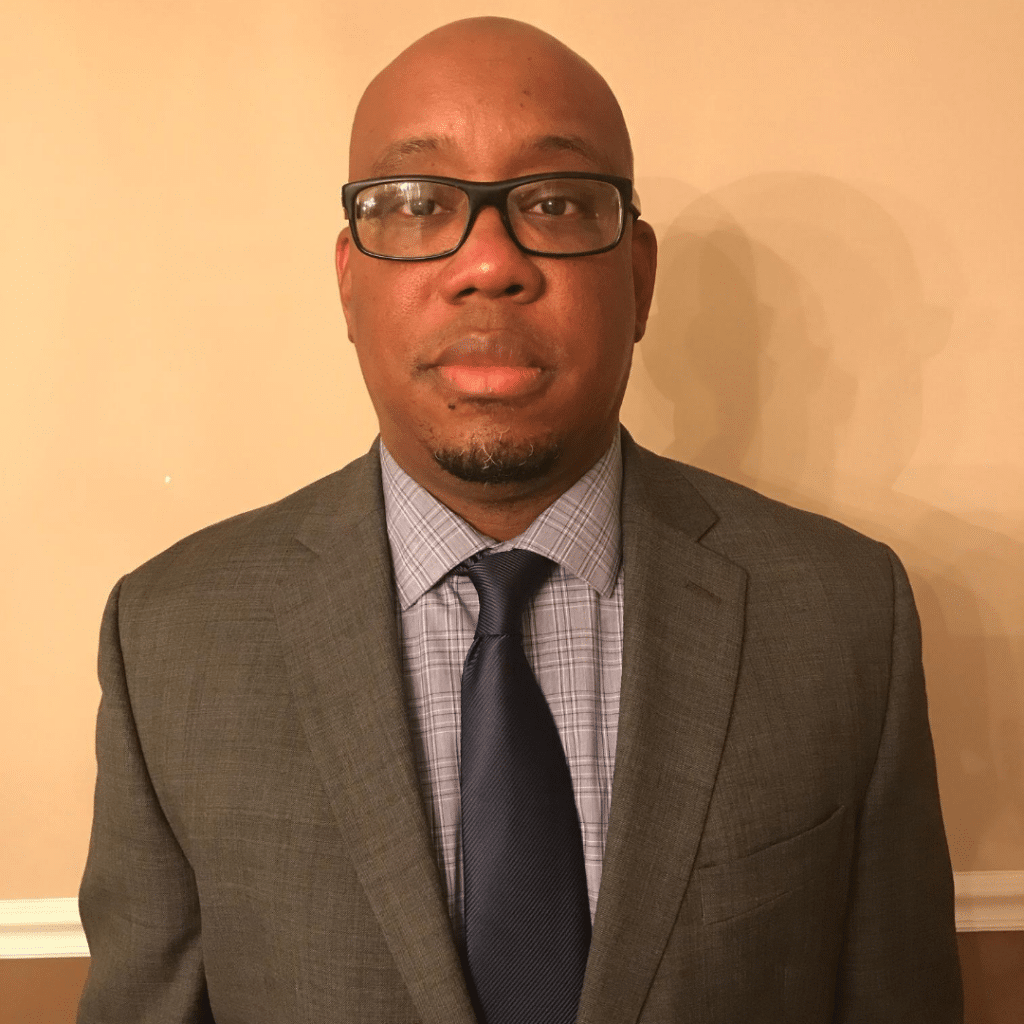 Andre’ D. Jones,  is a veteran local/regional television producer. In his 32-year career, Andre has won 5 regional Emmy awards, and has created award winning content across all major platforms (television/digital). He has covered the Super Bowl, Final Four and the Stanley Cup. He has an impressive rolodex and is connected to the major players in the athletic world. 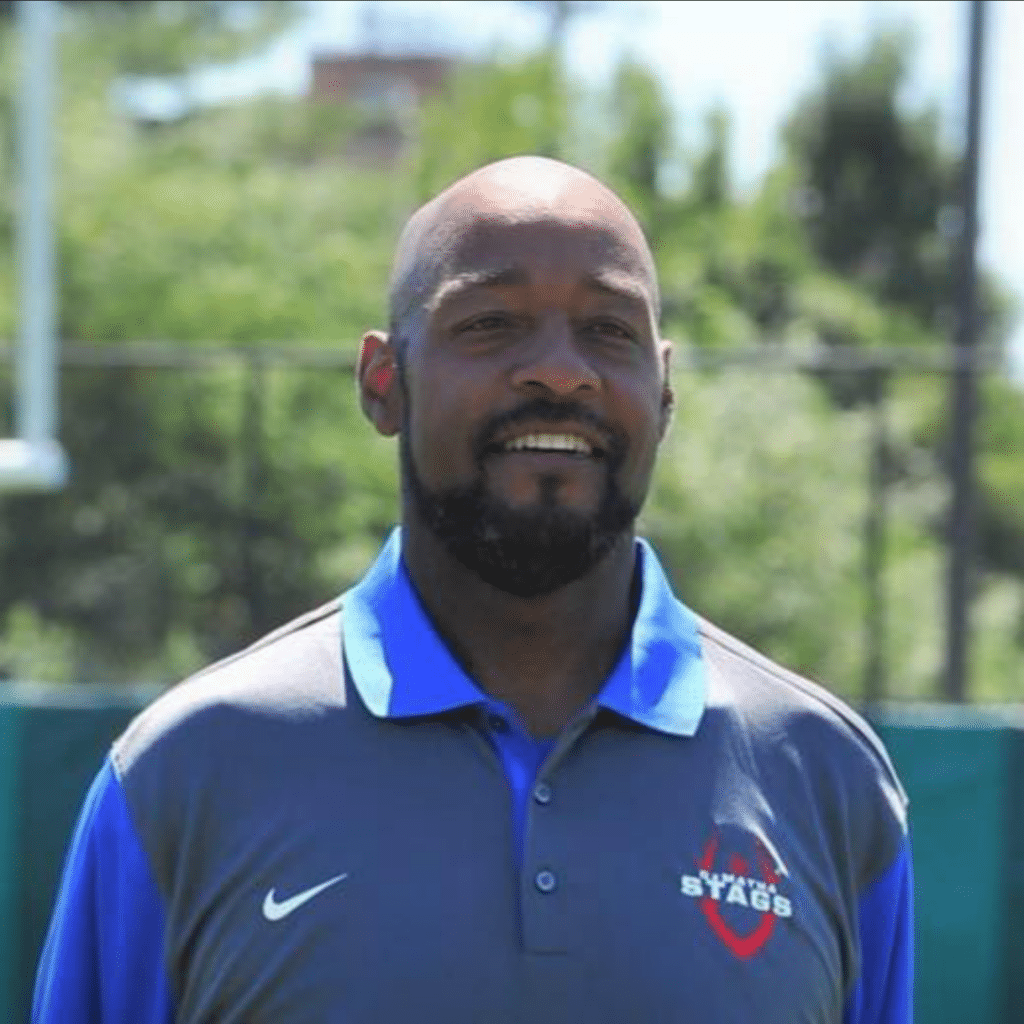 Deno Campbell, a former standout football player at both DeMatha Catholic High school and College of William and Mary, brings over 35 years of coaching experience to the Step2TheMic team. In his time as a player Deno earned All-Met and Pigskin Club honors due to his continual effort and numerous talents. He has been an integral part of the DeMatha Catholic coaching staff since 1985 and has helped shape several NFL players including Cam Wake, Rodney Mcleod, Ja’Whaun Bentley and Chase Young. Deno, as not only an athlete and a coach but a father as well, brings a range of interesting perspectives to the topic of sports and their players. Recently, Deno was inducted into the Maryland State High School Association Hall of Fame. 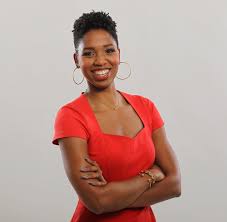 Monica McNutt, is a former college basketball player at Holy Cross High School, Kensington, Maryland and Georgetown University. During her playing career, Monica earned 1st Team All-Met honors in high school and 2nd Team All-Big East honors in college. She currently is a Co-Host MSG 150(MSG Network) and college basketball analyst for the ACC Network. Monica will be a rotating guest to the show. 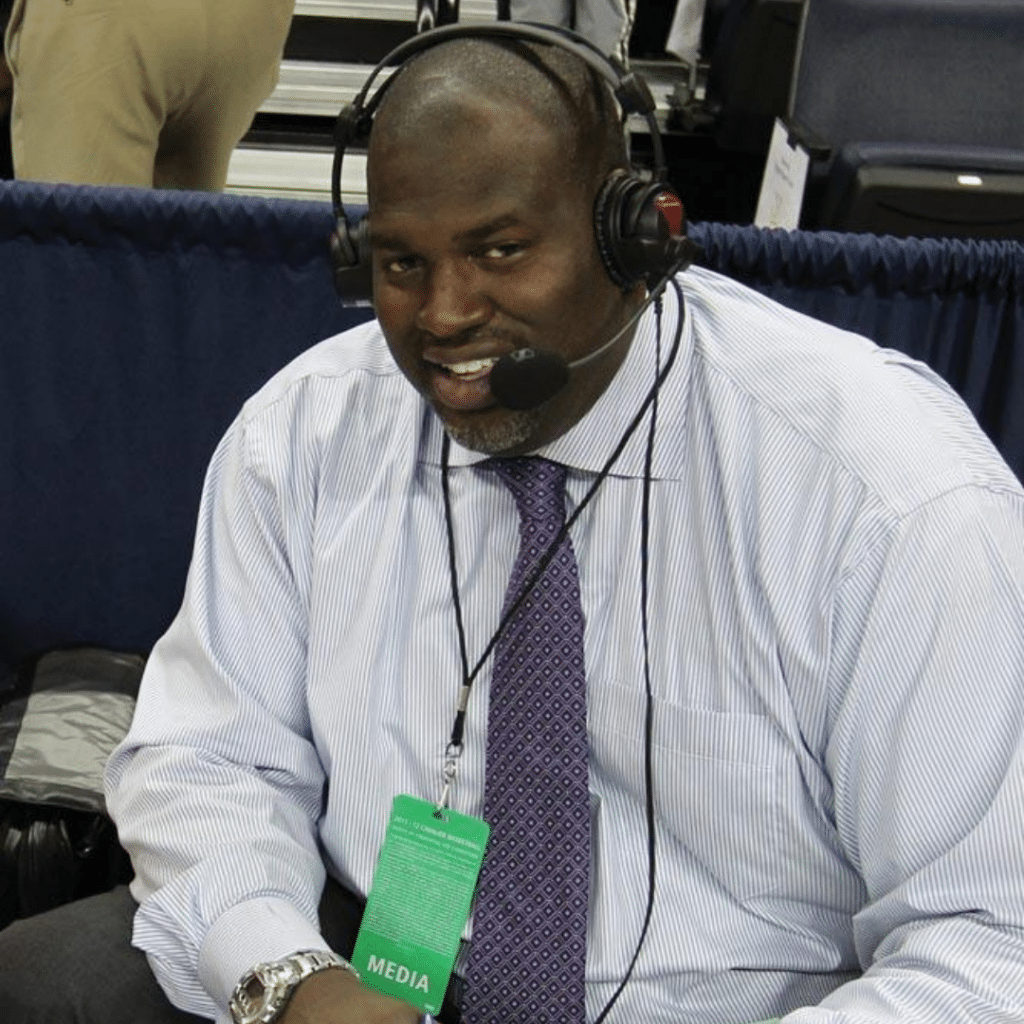 Ted Jeffries is a graduate of DeMatha Catholic High School in Hyattsville, MD. Jeffries was a two-year varsity basketball letterman under the late legendary Basketball Hall of Fame Coach Morgan Wootten. As a senior Jeffries earned an Honorable Mention All-Prince George’s County selection. After receiving a full athletic scholarship to the University of Virginia the 17 year-old high school graduate completed a post-graduate year at famed Fork Union Military Academy. Jeffries was voted the team “Co-Player of the Year” (averaging 16ppg and 8rebs per contest) while playing under the State of Virginia Hall of Fame Coach Fletcher Arritt.

The 6’9’ Jeffries lettered four times for the Virginia Cavaliers from the 1989-90 season through the 1992-93 season. As team captain in his senior year (1992-93), averaging 10.3 points and 8.0 rebounds per game, Jeffries earned an All-ACC Honorable Mention selection. That season, he also received UVA’s Michael McCann Leadership Award.

After try-outs with the Boston Celtics and the Chicago Bulls in the NBA, Jeffries played internationally on the professional level for eight years. During that period he played in Spain, Japan, Poland, Latvia, Germany, Turkey, Taiwan, Venezuela and twice in the CBA with the Shreveport (LA) Storm and the Yakima (WA) Sun Kings.

After his playing career ended, Jeffries was a D-1 assistant basketball coach at Coastal Carolina University in Conway, SC and the College of William & Mary in Williamsburg, VA (2000-2003). Most recently, Jeffries was a part of the Virginia Men’s Basketball radio broadcast team as a Color Analyst (2011-2017).

Our first two guests include #DMV legends Walt Williams and Tony Massenburg. This dynamic duo enjoyed successful careers at the University of Maryland and in the NBA. Walt and Tony will discuss their new book “Lessons from Lenny,” the Michael Jordan vs. Len Bias rivalry, Prince George’s County basketball culture, all-time favorite NBA cities, and why WWF superstar, “The Junk Yard Dog” gave Walt a ride home from the club one night.

He won three NBA titles with the Chicago Bulls, he won a Big East title at Providence College and he’s one of the top basketball players from Prince George’s County. Dickey Simpkins “Steps2TheMic,” with Chris Miles and Ted Jeffries talking the #LastDance and #BasketballCounty documentaries.

Azzi Fudd is the nation’s top girl’s high school basketball player; On Episode #4, she talks about her college recruitment, tips she learned from Steph Currry, her legacy, and the late, Kobe Bryant

From Hyattsville to Tobacco Road and now South Bend, Mike Brey is a difference-maker. On episode five, he goes one-on-one with our “Step2TheMic” crew to talk about his relationship with Morgan Wootten, Coach K at Duke, and his time as the Notre Dame Head Men’s Basketball coach.

The death of George Floyd just may have caused our nation to reach its boiling point. Americans are visibly upset, and rightfully so. Some groups are expressing themselves through organized demonstrations. The mass protesters are demanding change. But is anyone listening? Our “Step2TheMic” crew weighs in, sharing their views on racism in America today, how we can get past this tragic moment and a vision for better days ahead.

Stepping to the Mic on Episode 7 is a man who’s making an impact on and off the basketball court. Malcolm Brogdon chats with Chris Miles and Ted Jeffries about his clean water initiative in Africa, winning an #ACC title and playing with NBA All-Stars Victor Oladipo and Giannis Antetokounmpo

They were difference-makers on the football field and now they are using their platform to make a difference off it. Stepping to the Mic on episode eight are two dynamic young men; Philadelphia Eagles safety Rodney McLeod and his former high school teammate, Jonathan Mason, join Monica McNutt and Deno Campbell to discuss the #NFL#DrewBrees,#BlackEmpowerment and #BlackLivesMatter

The Step2TheMic team is honored to have the University of Maryland Men’s Head Lacrosse Coach John Tillman join us on Episode 9. Coach Tillman discusses how the corona virus pandemic affected their season, he reflects on Maryland’s 2017 National Championship team and he remembers lessons learned from the late Brendan Looney.

As we continue our Championship series The Step2TheMic team welcomes the University of Maryland women’s Head Basketball Coach, Brenda Frese, to the show. On Episode 10, Coach Frese talks recruiting, the talent rich #DMV area and the importance of player development.

Step2TheMic Episode 11 features one of the best coaches in college basketball; The University of Virginia’s Tony Bennett. In this episode the head Wahoo talks about his legendary shooting contest with former NBA teammate Dell Curry, lessons learned from losing to UMBC and winning a NCAA National Title.

On episode 12, former UConn Athletic Director, Jeff Hathaway Steps2The Mic to reflect on his days in the Big East conference; his relationship with five Hall of Fame coaches, Gary Williams, Lefty Driesell, Jim Calhoun, Geno Auriemma and the late, Morgan Wootten. Also, Jeff offers his opinion on the hot topic in college athletics, should players be paid? And, he relives a funny story of a meal he shared with boxing legend Sugar Ray Leonard.

We are honored to have one of the greatest that has ever laced them up join us on episode 13. Tina Thompson, Steps2TheMic and reflects on growing up in Los Angeles, her playing days in Houston, winning four consecutive WNBA Titles and her current role at the University of Virginia.

Happy Fourth of July weekend #DMV! On episode 14 we catch-up with a pair of Gonzaga Eagles; Caleb Williams and Randy Trivers. The Gonzaga dynamic duo relive their thrilling 2018 WCAC Championship win vs. DeMatha; Coach Trivers critiques his star quarterback’s best attributes and Caleb talks recruiting and which school has his attention.

On episode 15, we hit the hardwood and head over to Forestville, Maryland to catch-up with Bishop McNamara’s Head Coach Frank Oliver and his former hoop star Jakia Brown-Turner. Topics include, the respect for players in the DMV; the night Jakia almost scored 50 points in a high school game and Coach Oliver remembering the day he met the 44th President of the United States, Barack Obama.